This first day of Kwanzaa our focus is Umoja (Unity), which strives for and works to maintain unity in the family, community, nation, and race. Our good friend at Scouting Liahona explains it this way

It’s clear from BP’s words that patrols are a key element in Scouting, but in the LDS Church we have another unit of organization to consider – the Quorum. Let’s take a closer look at patrols and see how they fit in with the Quorum.

The Scoutmaster Handbook explains quite a bit about patrols. Following are some excerpts (in italics), along with some commentary about how this works from an LDS perspective.

“A patrol is a small group of boys who are more or less similar in age, development, and interests.” In the Church, quorum members are considered to be similar in age, development and interests. Even though they might be quite different in regards to hobbies, talents, and sports team affiliation, their common Priesthood is a significant biding factor.

The Scoutmaster Handbook continues, “Working together as a team, patrol members share the responsibility of making the patrol a success… All enjoy the friendship, sense of belonging, and achievements of the patrol and of each of its members.” This might be what we mean when we use the term ‘quorum unity’.  Also, there are many situations in the Church where we ‘share responsibility for success’, I’m thinking of missionary companionships, Priesthood and auxiliary presidencies, ward and stake activities, etc.

“They [patrol members] gain confidence by serving in positions of patrol leadership.” Certainly one of our goals for quorum presidencies in the preparatory priesthood is to “gain confidence” through real-world experience.

“Each patrol selects a name for itself, decides on a yell, and designs a flag. A patrol takes pride in its own identity, and its members strive to make theirs the best patrol possible.” This is the where the ‘fun’ occurs for the boys. We know that the ‘game of Scouting’ is what appeals to young men, and the friendly competition that arises between patrols is a great part of the Scouting fun for boys of that age.

Patrols are identified as having about five to eight members, and in LDS wards where quorums can be small, it’s not uncommon to find a Deacon’s Quorum organized as a single patrol. Personally I’m in favor of having more rather than fewer patrols whenever possible. 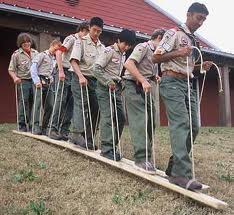 With a Deacon’s Quorum of 12 members, I’d suggest two patrols of six, rather than one of 12.The main reason is that competition between two or more patrols helps to create a strong patrol identity and a sense of belonging. The possibilities for inter-patrol contests help create urgency and meaning to support other aspects of Scouting that are more problematic with a single patrol.

Many of the best BSA training experiences, such as Wood Badge and NYLT, rely on multiple patrols to create a sense of competition and identity, which are used to strengthen patrol unity and build relationships between patrol members. We can replicate the successes of these training events by utilizing the patrol method in our ward units.

One thought on “Small Patrols Build Strength and Unity”