One Nation Under God

Before Elder Gary E. Stevenson was made an apostle in October, 2015, he had served as Presiding Bishop. As such, he was invited to speak at the Duty to God breakfast of the Annual Meeting of the Boy Scouts of America held on 23 May 2013. In part of his speech he said that as Scouters we could do a better job teaching the cadence and meaning of the Scout Oath, but simply adding a pause after the word “God” in the Oath.  He said:

As a young Boy Scout, I learned the Scout Oath. I recited it each week with the following cadence breaks:

On my honor,
I will do my best,
To do my duty,
To God and my country.

I don’t think I am alone in this. Most of us probably learned it that way.

I know I did, but I wonder if the pause after God is all that he is pointing to when he said:

But now that I am on the other end of life, I see the misplaced pause in the cadence separating duty and God. I should have been saying:

On my honor,
I will do my best,
To do my Duty to God,
And my country.

It feels very different to say it that way, but it has the right emphasis. Or should I say that removing the oral pause between “duty” and “to God” adds the proper respect and priority.

It was interesting to me today to read a similar observation by John Jones posted on May 25, 2015 on his My Scout Stuff blog site:

Whenever I’m in a group setting that recites the Pledge of Allegiance, there always seems to be some inconsistency between those who say:

one Nation, under God (with a pause between these two segments) and
one Nation under God (spoken as a single statement).

When I was growing up some 30 years ago and God didn’t seem under attack as much as He is today, I always thought the brief pause between these words just made for power statements meant to be spoken with emphasis. For example, I remember saying this pledge in a manner that paused after each statement as follows: 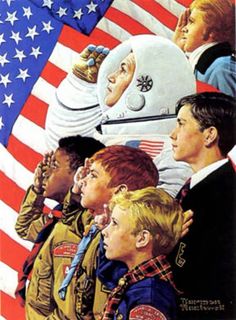 I pledge allegiance
to the Flag
of the United States of America,
and to the Republic
for which it stands,
one Nation
under God,
indivisible,
with liberty
and justice
for all.”

Nowadays, the more I see God removed from so much public interest, the more I think we need to make a concerted effort to keep this part of the pledge together so it cannot be removed as two separate thoughts. In other words, we should say this pledge as follows:

“I pledge allegiance
to the Flag
of the United States of America,
and to the Republic
for which it stands,
one Nation under God,
indivisible,
with liberty
and justice
for all.”

If you look at the http://uscode.house.gov/browse/prelim@title4/chapter1, the version that was signed into law on June 15, 1954, is the way our Pledge of Allegiance was designed – one Nation under God – a single statement without punctuation, meant to preserve the fact that many of our country’s values are based on a connection to God dating back to our Founding Fathers.  So let’s make sure we say it that way so this religious tie doesn’t get removed as easily as it was added.

Both Elder Stevenson and Scoutmaster Jones make a good point; in Scouting we need to make Duty to God our first duty and one that gives God both “proper respect and priority.”